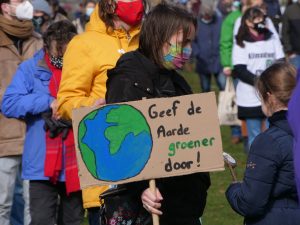 The elections are over and this week sees the installation of the members of the new City Council. We are pleased that the election result indicates a majority of members endorsing the goals and aspirations of the Climate Coalition.

Even though one of the key leaders of the Citizens’ Council failed to obtain enough votes, we’re looking forward to the early launch of the first initiative. We are not standing still however. Environmental and climatic quality remains on the decline, perhaps even endangered by the current war in Ukraine. And the ‘Pavlov’ response of our government in generically compensating for the rise in energy prices fails to reflect a well-thought-out climate policy!

The Haarlem Climate Coalition aims to mostly remain within our Haarlem region in its approach and is looking forward to the upcoming coalition discussions and programme, which may possibly be drafted before the summer. And the associated budget to the City Council will reveal what is being achieved from the election promises made!

The previously distributed Groene Stemwijzer (which is still available via the QR-code and via www.kiesklimaat.nl), clearly shows the standpoint of the various parties on these issues. And we are already announcing that this benchmark will be used in next year’s provincial elections!

We will of course continue to be visible in the coming months, jointly or as individual organisations. Maybe at Bevrijdingspop and the Haarlemmerhout festival.

John Schrama, on behalf of the HAARLEM CLIMATE COALITION

The Haarlem Climate Coalition is a partnership between the local branches of Extinction Rebellion, Milieudefensie, , Grootouders voor het Klimaat, FNV Lokaal, alongside the Stedenband Haarlem-Mutare Foundation and IVN-Zuid Kennemerland.